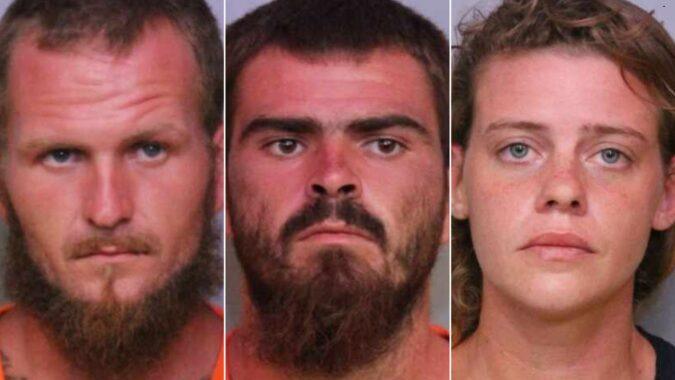 Deputies arrested three people they believe are associated with a massacre in Frostproof over the weekend in which three men were killed.

The three best friends were brutally massacred not far from a spot they picked out for some night fishing.

Tony faces three felony charges of murder in the first degree. Whittemore and Robert are facing three counts of accessory to murder and one count of tampering with evidence, Grady said.

The day after the murders were reported, PCSO received hundreds of tips from the community regarding Wiggins, who had accumulated 230 felony criminal charges in his lifetime, Judd said.

“This is evil incarnate,” Judd said in regards to Tony Wiggins. “His criminal history should shock your conscience. It shocks mine. He was first arrested at 12, and has had 230 felony criminal charges in his arrest history… He’s a thug. He’s a criminal. He is pure evil in the flesh.”

While the tips were helpful, what ultimately had detectives looking toward Tony was a Dollar General bag found in Tillman’s truck.

Detectives received video surveillance from the store which showed Tony and Robert at 9:56 p.m. Friday standing behind Tillman in the store’s checkout. Whittemore was also determined to be in the store.

A later interrogation of Robert revealed that Tillman explained to the cashier he was on his way to a fishing trip with Kevin Springfield, Judd said. Robert told his brother about Tillman’s plans to meet Springfield. Tony then decided to follow Tillman to the lake accompanied by Robert and Whittemore. 1 thought on “‘Evil in the flesh’: 3 arrested in Polk County massacre of 3 fishing buddies”