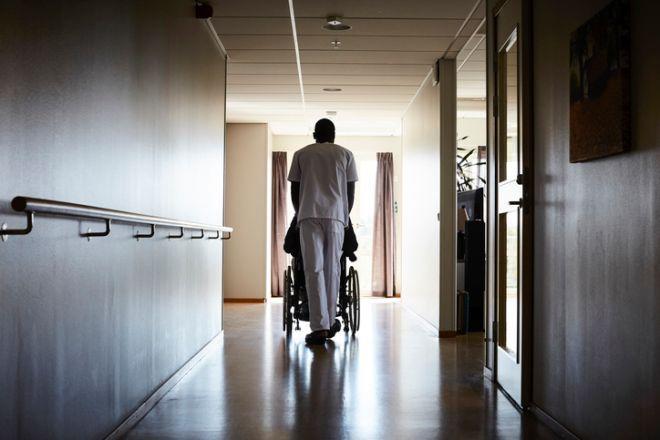 Former nurse Nathan Sutherland was sentenced to 10 years in prison on Dec. 2, for sexually assaulting an incapacitated woman at Hacienda HealthCare facility in Phoenix, Arizona, where she later gave birth to his child.

Sutherland was arrested and charged with sexual assault and vulnerable adult abuse in 2019, after a DNA test tied him to the patient’s child. He was subsequently fired and later pled guilty this past September.

After serving his time, Sutherland will also be on lifetime probation and required to register as a sex offender.

Superior Court Judge Margaret LaBianca, who presided over the case, gave Sutherland the maximum sentence allowed for the sexual assault charges he faced, as requested by the victim’s family and lawyers.

“It’s hard to imagine a more vulnerable adult than the victim in this case,” the judge said at Sutherland’s sentencing.

The woman, who was 29 at the time of the sexual assault, had been living at Hacienda HealthCare since she was 3-years-old.

Her family states that she suffers from “intellectual disabilities as a result of seizures early in her childhood,” NBC News reports.

According to her loved ones, the victim has some ability and movement in her limbs, head and neck but cannot speak.

Maricopa County Attorney Allister Adel said in a statement that Sutherland’s sentencing was appropriate and “took into consideration numerous aggravating and mitigating factors, including the vulnerability of the victim and the position of trust by the defendant.”

In court on Thursday, Sutherland apologized to the victim and her family — including the woman’s mother, who is her guardian.

“To the victim, I am sorry,” Sutherland said on Thursday. “You didn’t deserve to be hurt no matter what was going on in my personal life and the demons I was fighting. I had no right to put you through that.”

Shockingly, 911 reports from the day the woman gave birth highlight that Hacienda’s staff hadn’t even been aware the victim was pregnant.

In one of the lawsuits filed by her family, a medical examination noted that the victim was “violated repeatedly” and may have been with child even before the pregnancy that resulted in Sutherland’s arrest, according to the BBC.

Bill Timmons, Hacienda HealthCare’s CEO at the time, resigned after the victim gave birth at the long-term care facility. The woman’s family was later awarded $7.5 million by the state of Arizona and millions more by Hacienda and others involved in the victim’s mistreatment.

In a statement commenting on Sutherland’s sentence, the facility’s current CEO, Perry Petrilli, said: “We are relieved that he will never again torment another innocent human being.”