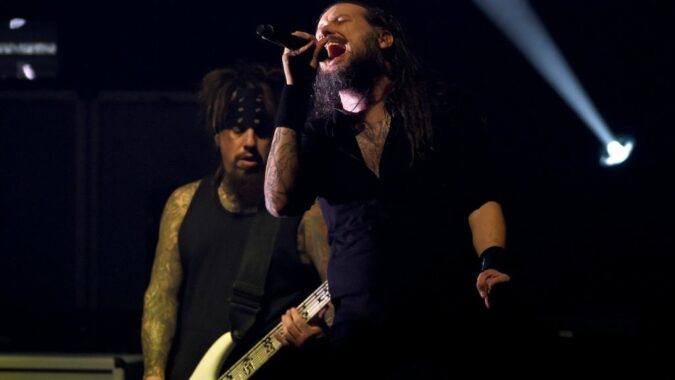 Korn frontman Jonathan Davis says that he hopes to see his dear friend Fieldy return to the band, but only if the bassist can overcome the “bad habits” which caused him to step away from the nu metal superstars in June. Though he played on the Californian band’s forthcoming Requiem album, due for release in February, the bassist is conspicuously absent from the Korn’s new promotional photos

Fieldy, real name Reggie Arvizu, revealed in June that it had been “suggested” to him that he should sit out the group’s 28-city US summer tour, in order to “heal”, acknowledging that his behaviour “has caused some tension with the people around me.”

“I will be working towards getting the bad habits out of my system,” he wrote in a June 21 social media post. “Jonathan, Munky, Ray and Head, I love you and I don’t want to bring any tension or bad vibes to the circle.”

Five months on, it seems that the door is not yet open for the bassist to return.

“I love him; he’s my brother,” Jonathan Davis tells Kerrang! “But I watched somebody I care about die [the singer’s estranged wife Deven died of an accidental overdose in 2018] and I’m not going to fucking do that again. I refuse to. I will feel guilt for the rest of my fucking life because of that. I tried my hardest but perhaps if I’d been a little bit tougher there’d have been a different outcome. I pray that he can figure it out and get better and come back and be a huge part of this band again.”