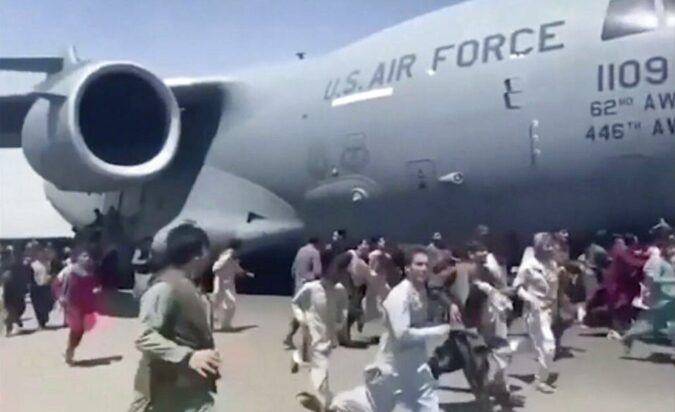 The crew of an Air Force plane, on which human remains were discovered following takeoff from a chaotic scene at Hamid Karzai International Airport in Kabul, reportedly were met by mental health counselors and chaplains after landing.

Air Force Chief of Media Operations Ann Stefanek confirmed on Tuesday that “human remains were discovered in the wheel well of the C-17 after it landed” at a base in Qatar, and videos posted to social media show what appears to be bodies falling from the sky after takeoff. A report by the New York Times offered more details about the harrowing events that led to the grisly finding by the crew.

The team operating a gray C-17 cargo plane loaded with equipment and supplies for U.S. military forces helping with evacuations quickly jumped back into the aircraft within minutes on Monday and prepared to depart, pulling up the loading ramp before all the cargo was removed. That was when they saw a throng of people rush their way, officials said.

The crew was cleared for takeoff by the U.S. military, which took over air traffic control at the airport. Officials said although they knew desperate Afghans were climbing onto the wings of the plane, they were not aware of people scrambling into the wheel well where the landing gear would retract after takeoff.