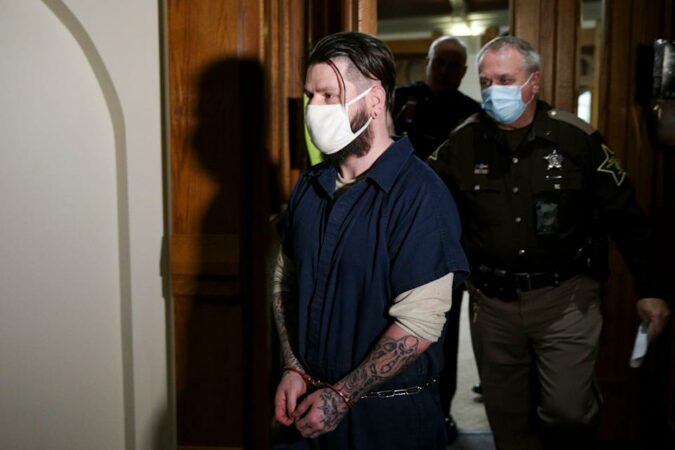 “Everyone is afraid what monster might be living next door, and it turns out to be you,” Meyer said.

“Your criminal history is atrocious. How can you be trusted to live peacefully in any community?” Meyer rhetorically said.

The monster nodded his head slightly and glanced down.

The self-confessed 42-year-old child molester and attempted murderer must serve 71 years of that 90-year-sentence before he is eligible for release. If he lives that long, Chadwell will be 113 years old and the year will be 2092.

Chadwell will never see freedom again and can never hurt another little girl, like he did on April 19 when he attacked the girl until she was unconscious.

He carried the child to the basement where she regained consciousness to find herself naked and in pain, and then Chadwell began sexually assaulting her.

“This case is every parent’s worst nightmare,” Tippecanoe County Deputy Prosecutor Jackie Starbuck said in her arguments for a lengthy sentence.

“I am struck by the overall seriousness,” Meyer said. “It began with a little girl coming to Mr. Chadwell’s door asking to pet a dog. Such a sweet gesture.

“You let her into your house and almost immediately savagely attacked her.”

The monster stopped his sexual assault, locked the girl in his basement and went outside, where he saw the girl’s grandmother hollering for the girl.

“He goes to the grandmother, consoles her, rubs her shoulder and tells her it’s going to be OK,” Starbuck said.

“She was only 9. That sparkle in her eyes; it’s gone,’” Meyer said, reading a portion of the grandmother’s letter to the court.

“How sad for her,” Meyer said, commenting on the grandmother’s comments.

After assuring the grandmother that everything is going to be OK, the monster returned to his home at 714 Park Ave. to continue his victimization of the girl.

When officers looking for the girl knocked on his door, he was shirtless and told them the girl came over, petted his dog then headed off in a specific direction, Starbuck said.

“Should I get dressed and come and look for her,” Starbuck said Chadwell asked as he saw officers discussing the search near his house.

Ten minutes after the officers’ first contact with Chadwell, they knocked on his door again, but he didn’t answer, Starbuck said. Fifteen minutes after their second visit to Chadwell’s door, officers knocked a third time, and he answered.

His television was blaring the screams and noises of a horror show, Starbuck said.

But the real horror was in the basement.

Chadwell let police in to search his house, and officers found the girl, bloody, beaten and naked in the basement. She was hospitalized in Riley Hospital for Children that week, including on her 10th birthday, Starbuck said.

Prosecutors asked Meyer to sentence Chadwell to prison for 155 years. Chadwell’s attorney asked for a lenient 56 years with 54 years to be served in prison.

Meyer sentenced Chadwell to 40 years for attempted murder and added 20 years to that sentence for being an habitual offender.

All totaled, Chadwell will serve 75% of the attempted murder and habitual sentence — 45 years. He’ll serve 85.7% of the child molesting sentence — roughly 26 years.

To avoid double jeopardy issues with the attempted murder conviction, Chadwell was not sentenced for battery, strangulation, kidnapping and criminal confinement.

Chadwell, who pleaded guilty on Oct. 22 without a plea agreement, made a few statements before sentencing, acknowledging his horrific deeds, saying he did not know from where his behavior came.

“This is not who I am. It is not who I was raised to be,” he said. “I never wanted to hurt anybody, especially a little girl.

“I’m genuinely sorry,” he said, noting he’s glad his victim has family support to help her recover from the wounds he inflicted on her.

Chadwell said he does not plan to appeal his sentence.