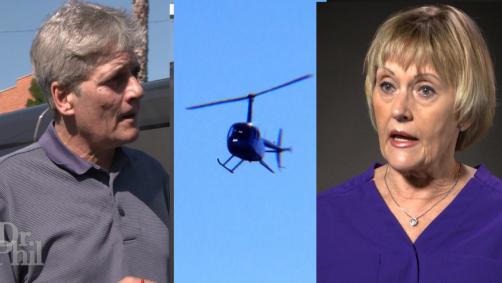 “My Ex-Husband Believes He’s Being Tortured Electromagnetically” Fay says for the past 13 years, her now ex-husband, Bryan, claims he’s been tortured daily by electromagnetic frequencies by the mysterious “Them.” She claims he spends his days combatting his “non-stop torment” by strategically placing magnets on his body and around his home, wearing plastic soda bottle rings on his fingers and toes, and ripping out all electronics! Bryan says he believes any electrical device, from a ceiling fan or car radio to his refrigerator, can be turned against him and used as a torture device. Are “They” really out to get Bryan? Or, as Fay believes, is he just suffering from paranoid delusions due to his past extensive drug use? Dr. Phil is joined by Dr. Sanam Hafeez and Dr. Lisa Nagy to examine just what exactly is happening to Bryan. You don’t want to miss it!