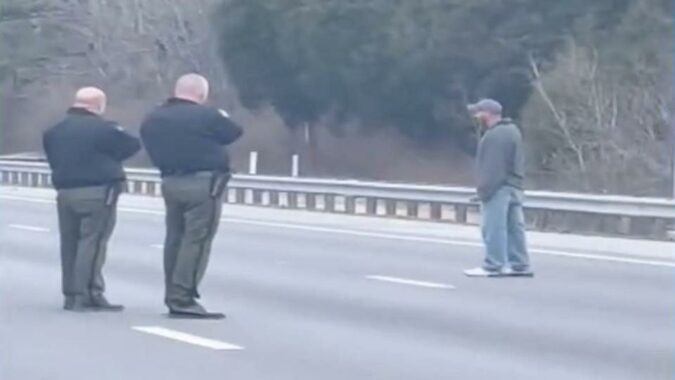 Nine police officers in Tennessee opened fire at a 37-year-old man on Thursday afternoon after a confrontation on an interstate highway in Nashville. The suspect, who police said had been sitting on a guardrail on the busy roadway, died.

BREAKING: TBI is investigating a deadly officer-involved shooting on I-65 in Crieve Hall this afternoon. See the latest information on the investigation. https://t.co/BN83p7EzNN pic.twitter.com/eO8YAMShYV

In a video filmed by a bystander and posted to Twitter by news outlet WSMV, the man can be seen standing still in the right lane of the highway as almost a dozen Tennessee Highway Patrolmen and Nashville Police look on, guns drawn. The entire highway is blocked on both sides. The man raises his arms towards police, and the video pauses. Multiple gunshots can then be heard.