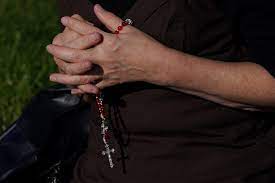 ROME—“Marie” was placed in a French Catholic boarding school for “young girls from good families” when she was in the fifth grade. She remembers a nun who would come to her class every day to choose a student to help her with Mass. But the nun wasn’t looking for someone to help her. She was looking for a victim.

“I was 11 and looked 9. She would choose me once every two or three times,” she recalls. “She would take me to her office, lock the door, and then draw the curtains. After which she would put me on her knees to make me read the gospel according to Saint Paul or another saint, while she squeezed me with one hand to her chest and pulled down my panties with the other hand. We were of course in pleated skirts and not in pants. It terrified me and paralyzed.”

“Marie” couldn’t talk to her devout Catholic parents about the abuse until a friend convinced her to do so. The result, she says, was catastrophic. “You are really a pervert, a vicious liar. How dare you say such things?” her parents told her. In fact, her parents had told the nuns that she was being sent to boarding school because she needed to be tamed. “I was truly [a gift] for this nun… because she knew full well that she did not risk anything.”

The abuse lasted the whole year. At the age of 35, “Marie” told her mother again about the abuse. “My mother blissfully told me that it was impossible for a nun to whom she entrusted her daughter to abuse a girl,” she says. “Female pedophilia exists and unfortunately the media never talk about it.”

“Marie” was certainly not alone. Dozens of other victims of priests, nuns, and Catholic school personnel in France form the basis of a 2,500-page report released Tuesday by a special commission led by Jean-Marc Sauvé. While 80 percent of the victims were young boys between the ages of 10 and 13, many young girls were abused as well, and not only by priests. Nuns used crucifixes to rape little girls or forced boys to have sex with them, too. The No Worries Workbook: 124 Lists, Activities, and Prompts to Get Out of Your Head―and On with Your Life!