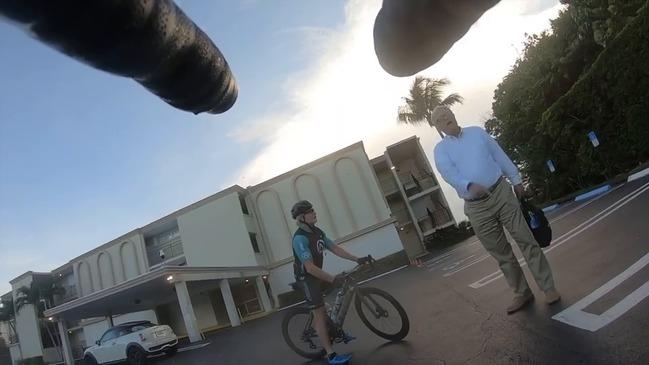 A cyclist captured an altercation between himself, a fellow cyclist, and a motorist just off the A1A in Palm Beach, Florida, on July 7.Diego Broglia was cycling along the A1A when a driver in a white SUV came close to him and the group of cyclists he was with. Broglia followed the SUV into a parking lot where he and another cyclist had a verbal altercation with the driver.In the footage, the driver can be seen holding a gun in his hand before putting it in his pocket. The cyclists approached the driver, asking him to “just be careful.” The driver then tells the cyclists “No, I’m not being careful. Stay the f*** off the road,” as the cyclists argue he was too close as he passed them.According to several Florida bicycle road safety organizations, the minimum clearance for passing a cyclist in a vehicle is three feet..“I just wanted help him understand that he has to share his road and that we all want to get home safe to our families,” Broglia wrote on Facebook.“He just went really close to us and we all freaked out because his mirror could just wipe us out,” Broglia told Local 10. Credit: Diego Broglia via Storyful