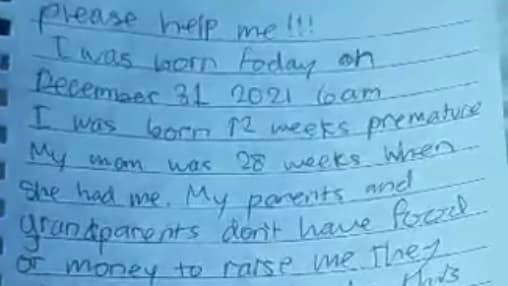 Alaska police say they have found the young mother of a newborn baby who was abandoned in a cardboard box on a freezing street with a heartbreaking note.

“The investigation into the circumstances surrounding the baby being abandoned is ongoing, and no criminal charges have been filed at this time,” Alaska State Troopers said Wednesday, adding that the “juvenile mother” was taken to a hospital for evaluation and care.

The infant boy was nestled under blankets in the box, which was left near some mailboxes in Fairbanks on New Year’s Eve, when the temperature was just 1 degree.

The woman who found him posted video of the note that was left, which was headlined “Please help me!!!”

“My parents and grandparents don’t have food or money to raise me,” the handwritten note said. “They NEVER wanted to do this to me.

“My mom is so sad to do this,” it continued. “Please take me and find me a LOVING FAMILY. My parents are begging whoever finds me. My name is Teshawn.”

The poster speculated that the mother might not have realized that Alaska has a safe haven law that allows unwanted babies to be dropped with police, firefighters, or paramedics until they are 21 days old.

“I hope the mother gets the help she might need. I doubt they could have afforded to take her to the hospital and she may be in need of medical attention. Please, someone knows this new mom, check on her! She might be in a desperate situation, feeling abandoned herself,” she wrote on Facebook.

“Clearly, someone in our community felt so lost and hopeless that they made probably the hardest choice of their lives to leave that innocent life on the side of the road with nothing but some blankets and a name,” she wrote.

“But she named him! There’s some love there, even if she made a terrible decision. I know we’re all struggling, I see it. I see you. I love you all and I’m here. Today I saved a baby and I’ll probably think about Teshawn for the rest of my life.”

Police had taken a sample of Teshawn’s DNA in an effort to identify relatives, but it’s not clear if that played a role in finding the mother. The mother’s age was not provided.

Medical officials have already said the baby—who was born 12 weeks prematurely, according to the note—was healthy.

Read more at The Daily Beast.